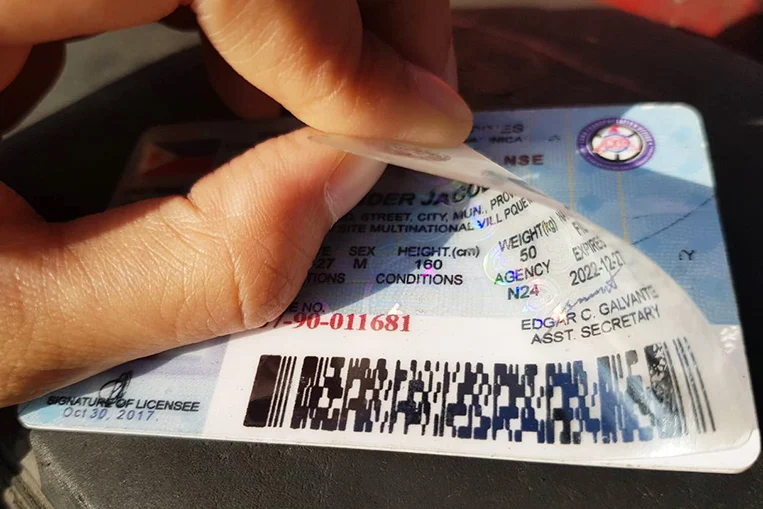 Fake IDs are an annoying issue that takes place worldwide. In the Philippines, fake LTO License is increasing in popularity. How to prevent this problem?

Typically, underage individuals in the Philippines often use fake licenses to attend certain age-limited events or skip traffic requirements and the cost of making a real one. Nevertheless, driving with a fake LTO license can put drivers at the stake of paying fines, imprisonment, or even accidents on the road. We will dig deeper into what violators could face and how to identify the fake identity. Hit the road now!

How To Know If LTO License Is Fake?

Gaining an understanding of how to check fake LTO driver’s license is pretty necessary one day, whether you have a real one or not yet. One day, your friends or relatives get in trouble with a fake drivers license, you can help them somewhat with your knowledge.

The approach of investigating a fake ID does not require any concrete tool. It’s simple as you can use the mobile phone’s flashlight. Place the phone backlight or flashlight on a driver’s license, and observe its other side. When you see the light turns white or yellow, it implies this card is fake. Towards the real one, the light will turn violet or blue.

Of note, LTO offers a technology that could integrate into any license to determine the fake from the original ones with ease. This advanced technology helps a myriad of Filipino reassure themselves if they got a real or fake card.

If these two above methods are not convincing enough or you do not have any phone available, you could try the third way. Then, based on your sense of the card’s thickness, you can determine what is real or not. In particular, the fake licenses are mild and likely to break easily. Meanwhile, the original identities are always firmer and thicker.

Pass on your know-how to your family members and friends if needed. All LTO original driver’s licenses have the same stiffness and thickness. Once you find one lighter than the others, you’d suggest your friends investigate whether this card has issues and change if needed. Driving and using a fake license can lead to many troubles, as discussed in the next section.

The last way to identify is by checking the card’s seals. There is a seal positioned around the License No., Restrictions, Blood Type, and a part of the owner’s photo on each card’s front part. The original cards’ seal is often evident while angled with the light.

On the other hand, the fake one is not as clear as the real one. To compare, collect as many licenses as you could to compare them, as all original LTO licenses have a similar seal’s clarity level.

A handful of Filipino drivers use fake driver’s licenses to evade several traffic violations. Many even store countless fake licenses to overcome hassles.

More often than not, a fake identity violation is clearly mentioned in the Republic Act No.4136. Conspicuously as the law said, no one is entitled to making or using a number plate, driver’s license, and other forms of imitation.

The Inter-Agency Council for Traffic reveals that violators will put violators in prison for up to 6 months for their faults. Also, DOTr (The Department of Transportation) will impose a fine of P3,000 and suspend the license for a year.

The traffic laws in the Philippines are stringent to violators. Therefore, you’d better use your original LTO driver’s license. It does not take you much money and time to complete the process, yet driving with a fake driving license will put you at risk of imprisonment and paying a punishment.

What is a fake drivers license?

Several motorists use a fake driving license to skip some hassles and the original LTO license’s cost or evade traffic violations.

How much is the punishment for those using the fake licenses?

Philippines’ authorities suspend license and impose a PHP 3,000 fine within one year towards violators, according to DOTr.

How much is the non-professional LTO driver’s license?

It can cost you PHP 800 for a non-professional LTO license. As a matter of fact, other factors need considering like driving school that could be pretty high-cost.

How much does a fake LTO license cost?

Can you be put in prison if you drive a fake license?

Yes, violators who drive a car with a fake license can be imprisoned for up to 6 months based on the findings.

Using a fake LTO license will end up with dire consequences and irritating penalties. As a result, you might as well avoid applying this way to skip acquiring expenses or overcome bylaws because you’ll be in charge of unexpected large debits in such cases. What’s more, advising anyone who intends to use a fake license is worth it.