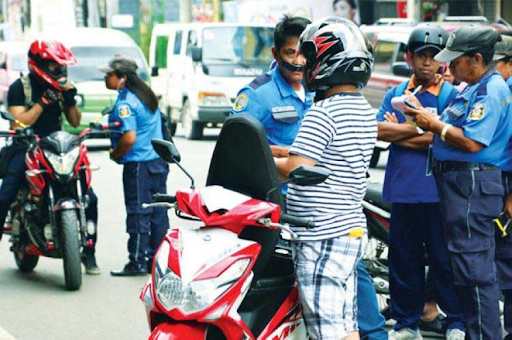 When riding a motorbike, we all need to strictly obey road traffic regulations, especially the helmet laws. This takes on even greater importance in the  Philippines, one of the most traffic-congested countries. If you don’t know anything about the no helmet violation fee, scroll this article!

The Motorcycle Helmet Act of 2009, or RA No.10054, mandates that all motorcycle riders, including drivers and back riders, wear standard protective motorcycle helmets at all times while traveling on any form of road or highway, whether on a long or short trip.

According to the law, there are four types of driving without helmet penalty for which we are found guilty if we do not comply. The following penalties apply if the violator fails violation of no helmet or fails to permit the back rider to wear the standard protective motorcycle helmet:

A fourth and subsequent conviction will result in the confiscation of the violator’s driver’s license, in addition to the fine.

The PNP Operations Board has released the following rules:

According to Major General Emmanuel Licup, director of the PNP Executive Department, a person who does not obey the rules will be penalized in the following cases:

He said that whether the national government would allow more people to back-ride would be determined by the riders’ enforcement.

Eleazar remarked that according to the National Task Force on COVID-19, restricting back-riders to married and live-in spouses would act as a test case to see if motorcycle riders adhere to the regulations to avoid COVID-19.

He clarified that it depends on the conformity with current laws, which is very necessary, because more applicants need to be accepted.

No Helmet Violation Fee: A Recent Viral Video Of A Violated Pinoy Rider

Many of you may have seen this viral video of a driver being pulled over for not wearing a helmet. While video-sharing people mock a driver’s statement, we believe it is important to explain what the law prescribes in situations like this.

It is worth saying that after watching the new video, it is clear that such cases are not uncommon. Indeed, it proves that ignorance among young people is probably not a singly one, and when punished, we don’t know what we’re being punished for?

A motorcycle rider was apprehended by Angeles City traffic enforcers in the video posted by Wilfredo Cristobal because his pillion was not wearing the required standard motorcycle helmet, as specified in RA 10054 or the Motorcycle Helmet Act of 2009.

Despite the fact that the violation was obvious, the motorcycle rider hauled the traffic cops over the coals and said he was being harassed rather than accepting the traffic violation ticket.

Later in the video, the rider insisted that he was wearing a helmet (a bicycle helmet) and that his pillion should be fined if he was not.

By the time of now, the video has been viewed more than 36,000 times and received more than 25,000 comments on social media. This is a wake-up number for those who are concerned about the general condition, which is a poor sense of the vast majority of young people in traffic.

Besides, the video clearly conveys the importance of complying with traffic laws and wearing a helmet while driving. This video reminds those who are and have watched to pay more attention when participating in traffic. Moreover, we must recognize the error and fix it together so that the problem does not occur again.

Also, we hope that this video serves as a reminder to those who still do not wear a normal motorcycle helmet. It must be designed especially for motorcycles and have a visor. It is, after all, for our own protection. So, make sure you will not pay any punishment for no safety helmet violation when out on the street!

And, above all, the legislation ensures that our lives are safer and more enjoyable.

Traffic laws are, without a doubt, necessary. It is important that you comply with all traffic rules, regardless of where you live or which country you reside in.

The purpose of this article is to highlight the importance of wearing a helmet while in the Philippines. All you need to keep in mind is to wear a helmet with your friends when taking to the streets to protect yourself and avoid no helmet violation fee!