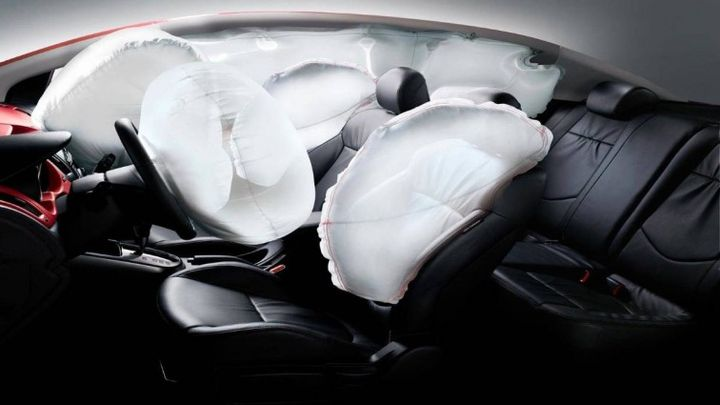 How do airbags work? To provide an appropriate response, learn about crash sensors and key components of the airbag mechanism.

Those of you who have dug deep into car model brochures when looking to buy a car may have noticed that modern cars are becoming increasingly comprehensive in terms of passive safety equipment. These two devices work in tandem and cannot function without one another. In the following article, we’ll look at how airbags work and how they can keep you safe in a car.

Before Allen Breed received a patent for the airbag in 1968, neither the airbag nor its companion, the crash sensor or airbag sensor, existed. It was referred to back then as merely the “sensor and safety system”.

It turned out to be the first actual functioning example of an electromechanical car airbag system, but let’s just say that it was very basic.

However, a number of patents dating back to the 1950s under John Hetrick are referred to as “car seat cushions.” This one uses compressed air, but as we all know, that was removed because it didn’t inflate quickly enough.

The “explosive” and instantly inflating airbag system wasn’t created until a Japanese man by the name of Yasuzaburou Kobori.

The U.S. government’s fleet of 1973 Chevrolet Impalas was the first to use airbags. However, the 1973 Oldsmobile Toronado was the first passenger car with airbags that were commercially available. However, because they were only available to the driver, these weren’t the airbags we are accustomed to today.

Since 1998, airbags have been a requirement for all automobiles. You can still purchase some cars here in the Philippines without airbags, at least in the United States.

How do airbags work in a car?

In a collision, airbags are intended to lessen head injuries. They achieve this by providing head and neck protection (whiplash) during the forward momentum brought on by the abrupt stop, also known as a crash.

What causes this to occur?

A moving object, like your car, has mass, as we all hopefully learned in our high school physics classes. Your car has a velocity because it is moving, and velocity is an object’s speed in a particular direction. An object has kinetic energy when those two conditions are met. The kinetic energy increases with increasing mass and velocity.

Manufacturers have implemented seatbelts to address that issue. They existed long before airbags. But seatbelts can’t shield someone’s head or neck from harm.

Ironically, the seatbelts’ force will cause the top of your body, namely your head and neck, to suddenly move forward. That could seriously harm your neck muscles, and of course, there’s a good chance that you’ll hit your head on the steering wheel or dash. As a result, the main purpose of an airbag is to protect your neck and head.

How effective are airbags?

Although airbags seem like a good idea, scientists prefer solid evidence, so are there any statistics showing that they lower fatalities? A thorough analysis of the eight-year period between 1985 and 1993’s traffic accidents was published in 1995 by Adrian Lund and Susan Ferguson. When compared to cars only equipped with manual safety belts, they discovered that airbags reduced the number of fatalities in collisions by 23-24% and by 16 percent in crashes of all types.

That is clearly a significant improvement, but it is important to note that airbags are themselves violently explosive and dangerous devices. Young children are most at risk, but adults are also at risk of eye injury and hearing loss. If an airbag saves your life, minor injury risk is a small price to pay. Nonetheless, it is clear that it is critical to investigate the potential dangers of airbags in order to make them as safe and effective as possible. Modern airbags (installed since the late 1990s) use less force than older designs, and there is compelling evidence that this has reduced crash deaths, particularly among children, without jeopardizing passenger safety.

>>> Suggested for you: Explore detailed information related to how often to change the oil

Airbags’ Purpose: Are they Essential?

Between 1987 and 2017, airbags saved the lives of 50,457 people, according to the American National Highway Traffic Safety Administration.

Airbags are the last line of defense against turning your head into scrambled eggs, so if you’re considering replacing the stock, airbag-containing steering wheel with a lightweight, sleek, but airbag-less racing wheel on your daily driver, think twice.

To sum up, airbags are quite important. We hope you find the article useful and may the article help you answer the question how do car airbags work?

Thanks for reading this article in our category Tips and Advice. If you have any questions, feel free to comment below or contact us at Philmotorlaw.com