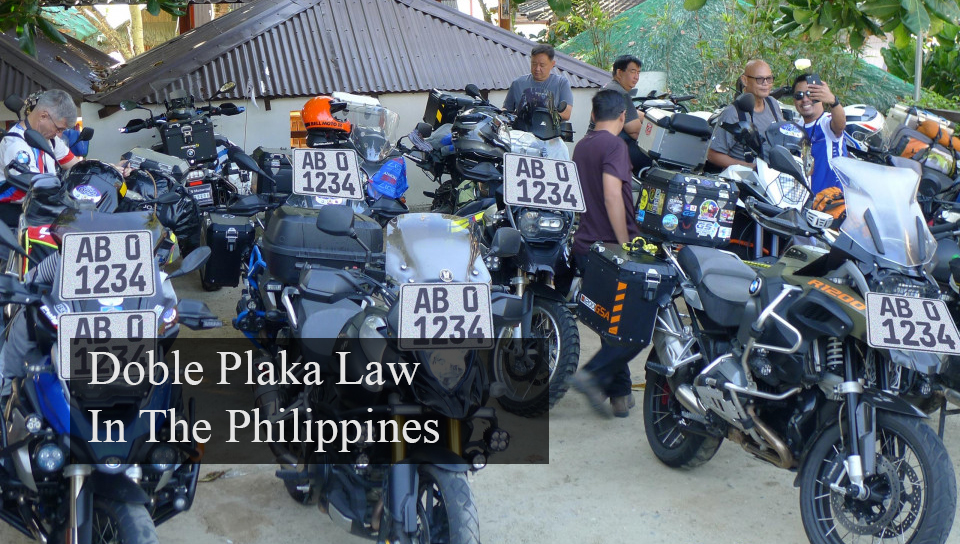 If you live in the Philippines and own a motorbike, we guess that you have heard about the LTO Doble Plaka law.

Doble Plaka law was released and faced fierce opposition from the Filipino. Then what is ‘Doble Plaka’ law, and why are there many disagreements about it? What specific content does it include? Read this article to understand what exactly Doble Plaka law is and get the best preparation in the future. Philmotorlaw will help you get to know more about it.

What Is ‘Doble Plaka’ Law?

Implementing rules and regulations for Republic Act No. 11235, also known as the IRR, has just been introduced by LTO on March 28, 2019. More specifically, RA 11235 was first signed and enacted by President Rodrigo Duterte. This version includes some modifications compared to the original version.

Going back to the past, after the RA 11235 law was signed for a month, Duterte was the one who raised his objection and urged Congress to reconsider this law, as the penalties are overly high.

Requirement for a motorcycles

Moreover, LTO opted for smaller license plates after the oppose of larger metal plates unsafe for drivers. While the front number sticker’s size is 135mm x 85mm, the rear section number plate of the bike is 235mm x 135mm, which is slightly smaller than Europe’s standard and larger than the current one.

Meanwhile, many people believe that the problem doesn’t lie with the size of the number plate but more on the penalties and the jail sentences for violators law RA 11235. Despite the President’s appeal, the law still seems overly heavy and remains intact.

This section will list out the provisions of the RA 11235:

First of all, section 12 of the implementing rules and regulations (IRR) requires the motorcycle owner to report the loss to the Joint PNP and LTO Operations Center within the next six days. Otherwise, that person is subject to a fine of between P20,000 and P50,000.

Under section 13, the number plate erasure action is prohibited, and those who commit the above acts will receive a prison sentence from the mayor or a penalty between P50,000 and P100,000.

Similar to actions like erasing, imitating, tampering, covering, or concealing, the plates will receive the same penalty.

In Section 14, drivers using stolen license plates will be subject to a fine of 50,000 PHP to 100,000 PHP or possibly a prison sentence from the mayor. The mayor is the one who decides on either punishment or both.

Following this, the law also includes provisions about vehicle detention. Law enforcement can keep the vehicle if it is suspected that the vehicle is involved in the violation.

The law, however, has some pleasant news for motorists in the event of a car arrest. In detail, law enforcement will be responsible for the consequences they cause. Clause 9 also stipulates that if law enforcement fails to account for the stolen motorbike within two days, they can face a corresponding prison sentence.

Besides, if your vehicle or equipment breaks down while in custody, you will be compensated for the total value of that property.

Under Section 15, Sales and import of motorbikes without parts to install the front plates. The manufacturers are required to prepare brackets to install front plates. LTO will not allow Motorbike that does not comply with this law to register.

Implementing rules and regulations for Republic Act No. 11235

What Is The Goal Of The Government In Releasing Ra 11235?

By replacing existing license plates with larger and clearer ones, the government considers that the new one will prevent the “motorcycle crime prevention act”. After the law comes into effect, the government expected to easily track criminals despite some objecting that the government should catch criminals instead of forcing riders to change number plates.

Ra 11235 Implementing Rules And Regulations: In A Nutshell

After reading this article, do you feel the punishment of Doble Plaka law is overly heavy? We hope you’ve understood this law and have the best preparation for what will happen.

To end this article, we look forward to your comment on your opinion about the Doble Plaka law. Thank you for your reading!